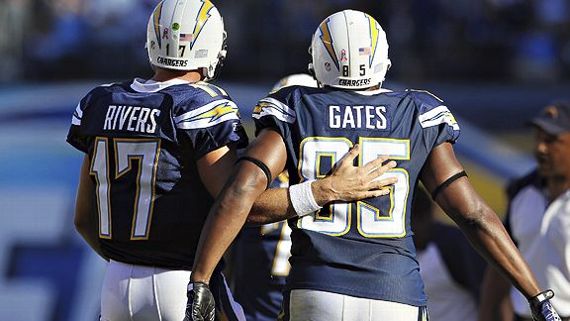 Expect Philip Rivers and Antonio Gates to work hard to send the veteran TE off into the sunset with a milestone (Photo: Jeff Gross/Getty Images).

A year ago at this time, I was off the Antonio Gates bandwagon. He was aging (then 35) and had Ladarius Green starting over his shoulder. What was there to like?

Well, I suppose the answer laid in his red zone skills and rapport with Chargers QB Philip Rivers. Gates wasn’t right for much of the season, slowed by a foot injury while on the field and ultimately missing five games. Still, in the 11 he played he made 56 receptions for 630 yards and scored five times. He finished as TE 11 despite missing more than 30% of the season.

Heading into the 2016 season, others have joined me on the anti-Gates bandwagon. And, because the masses are there… a value buy opportunity presents itself.

Gates is currently coming off the board as TE13 at pick 123 overall – having never finished worse than TE13 in his entire career. I get it, Gates is 36 years old and isn’t getting any faster – but he’s still able to use his body to create separation and remains a significant red zone presence.

With Green out of town Stevie Johnson going down, Gates’ role in the offense should not be any less significant this year. When in the lineup, he averaged more than eight targets per game in 2015. Beyond that, Gates is chasing a milestone this year and I share the perspective held by the folks at Rotoworld that his QB and his coaching staff will do what they can to help him achieve it: Maybe its foolish to base one’s fantasy projections on a player chasing a milestone, but with either a new stadium to angle for or a move to LA to build hype around the Chargers may find themselves playing for ‘good news’ stories in the second half of the season and this would certainly be one of them.

He comes into this year’s campaign healthy and while you’ll undoubtedly be reviewing the injury reports on occasion if you draft Gates, you have to assume that he’ll be effective from jump when on the field. If you’re not going to be going after one of the top-four TEs, let others spend on mid-rounders at the position and take the veteran in the cheap rounds.

After all, even with injuries and ailments last season, Gates scored 8.45 FPPG a year ago – enough to be a top-6 scorer at his position in a full season.