Early this week, I participated in my first dynasty draft of the year. Today, I’ll share the results with room for discussion, analysis and ridicule.

Admittedly, it’s a bit of a challenge to understand draft strategy in a specific league context given that a multitude of roster; scoring; and personal settings factor in to each selection.

That said, this forum provides me the opportunity to talk about the players that I’ve selected and what my short and long-term view of each is. Treat the piece that way, if you like.

For those more curious, some context: my team heavy is heavy on WR/TE talent and though I needed a little help at QB in this Super-Flex league I drafted last year with the express hope to pick up RB help in this year’s draft. I finished in second place and was slotted to draft 11/12 in each round. Laquon Treadwell was among the best receivers in this year’s draft and profiles as teh best dynasty option at the position (Photo: Chris Graythen/Getty Images).

Round one was the first of two rounds in which I had multiple picks – having traded up to #2 overall hoping I could wheel that into Ezekiel Elliott to solve my needs at RB. Alas, that didn’t happen, and I was left to choose between three seemingly equal candidates at WR – Lacquon Treadwell, Corey Coleman and Sterling Shepard. Treadwell has been ahead of the group in most dynasty ranks all preseason, despite limited production on the field and a concern about Teddy Bridgewater’s ability to throw the deep ball. Treadwell is straightline slow (4.65-40) but has the route running ability to make an impact in the vertical game.

Well equipped at WR, however, I’m willing to wait for them both to develop. In redraft leagues, I’d take Coleman and Shepard (in that order) ahead of Treadwell, but the Vikings have a clear need at WR and the Norv Turner offense is one that can produce a productive deep game. I expect Treadwell to start the season fairly low in the rotation and earn his way up over time. As the 6’2″, 215lb first round selection grows into the NFL game he has a legit chance to be a star in Minnesota and a redzone threat as well, after catching 82 balls and 11 scores last year at Mississippi.

Meantime, my need at RB was more immediate. With Elliot and Henry off the board before my next selection, it came down to Devontae Booker and Paul Perkins for me. Both are an injury away from big-time snaps, and while Perkins plays behind an aging veteran, there has been too much positive buzz around Booker this offseason to ignore. He’s already moved ahead of Ronnie Hillman on the Broncos’ depth chart and is an excellent handcuff in the short-term for a Denver attack that will trend significantly toward the run in 2016 and beyond. Anderson has done plenty to suggest he warrants his role as an every down back in Denver, but at this time last year he was locked in a dead-heat competition with Hillman to be the team’s lead back. He was able to hold off limited talent – but I’m not convinced that the former undrafted back has the chops to hold the job long term. Anderson just signed a four year deal heading into this season, but with just 10 million guaranteed it doesn’t really marry the team to him beyond 2017.

With 23 selections between my first and third round picks, the closet was quickly becoming bare. I’d hoped to see one of the QBs survive to this point, but with the hype around Dak Prescott building it wasn’t happening. So, I took a QB turned receiver in Houston instead.

I’m not totally ready to give up on Jaelen Strong and with a quality camp, Will Fuller clearly slots in ahead of Miller but the 3rd round pick out of Ohio State has an opportunity to step into a number three role right away. In any event, he won’t be starting in front of anyone in my strong receiver corps, but the early word out of Houston is that Miller has shown enough promise to suggest that they’ll find ways to use him now, with hopes that he’ll develop into a significant contributor at the position. Miller isn’t a pick for someone looking for immediate help at WR, but I’m not, so I’ll wait for a player with the height, weight and speed profile to excel at WR to develop as a route runner and hopefully do just that.

The fourth was another round with two selections for me, though I’ll admit that the returns here were a little less enticing than Round 1. Still, I actually think this was my most exciting round of the draft.

I’m intrigued by Alex Collins. Certainly, I’m more intersted in his long term prospects than Spencer Ware, Ka’Deem Carey and the others who went around him.

C.J. Prosise has ridden an early wave of interest all the way to an inflated draft stock. Meantime, he couldn’t get on the field until late in the preseason. While Prosise worked as the team’s third down back in their third preseason game, he might not be the next man up for long-term duty if Rawls goes down or proves ineffective. Collins still has some work to do to make the roster, if we’re being honest, but should he be a camp casualty he’ll land somewhere else. Collins lacks the burst of a top-end back but profiles as a guy who can handle running between the tackles well, and may find himself with some goal line work.

Thomas Rawls is locked in as the starter right now and earned that with a productive season in 2015 when he was on the field. In fact, he looks good enough that he may well be the team’s long-term answer at RB. With that, and his current position on the team’s depth chart he may not turn into anything… but the pick cost me nothing and he’s coming off a second-team All-Sec nod after a productive college career. 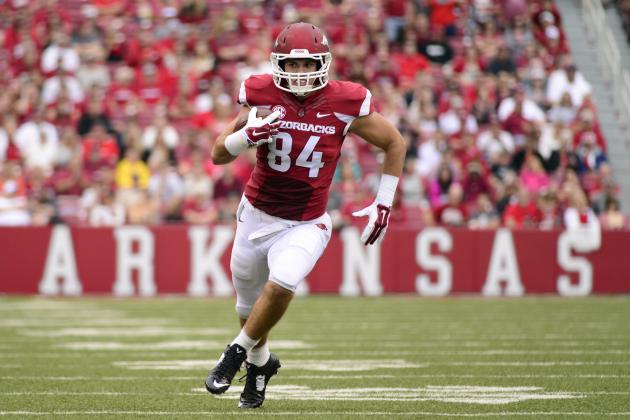 Hunter Henry has the athetlicism to step in as the long-term offensive replacement at TE for Antonio Gates (Photo: Sarah Bentham/Associated Press ).

Speaking of heir’s (and keeping with an all Arkansas 4th Round for me), Ladarius Green is no longer the next man up after Antonio Gates rides off into the sunset. Instead, that man is Hunter Henry. The thinking is that Henry can get on the field a fair bit this season due to his plus skills as a blocker (particularly in the run game), and the fact that the Chargers are quite thin at WR with the loss of Stevie Johnson. Henry has both the size required to win one-on-one battles and the athleticism to get open at all three levels. Expect him to see the field regularly in support of the run game, and to earn looks by getting open in 2016. All that being said, this is a pick for future seasons – whether I roll him out as a FLEX with Gronk at TE or turn a productive campaign into more players or picks I’m excited about the long-term fit in San Diego with Gates’ impending retirement.

I could have found room for a vet here and was very intrigued by Terrelle Pryor who went at the top of the round, but chose instead to take a lotto ticket on a relative unknown. The backfield depth chart in Buffalo is littered in front of him, but with Karlos Williams jettisoned earlier this summer the depth chart in Buffalo is unclear this year and beyond. LeSean McCoy is just 28 and remains good-to-go as the starter. Reggie Bush was just signed to work as a returner and contribute as a change of pace. And Mike Gillislee is present. Still, my third straight Razorback fell to the 5th round because of injury concerns only. If he’s able to stay healthy after missing his 2015 season, the strong, instinctual runner will have an opportunity to learn and grow slowly in year one. At this stage of the draft, if he’s off their roster or mine by this time next year I won’t be concerned… but, Williams strikes me as a guy who could electrify if he gets on the field.

This, from his NFL.com draft profile:

“Has enough size, heart and talent to be a three-down running back… Williams is one of the more creative runners in tight quarters that you will find in this draft, but teams won’t have to sacrifice too much toughness in order to take advantage of his slashing style.”

Another round, another unheralded back. A lot of this had to do with what players fell to me, but overall I’m quite happy to let others find interest in ‘hype’ guys or veterans with a limited ceiling while backloading my roster with guys who may just pay off. Essentially, if one of the three backs I selected from Round 4-6 find themselves as a starter over the next 2-3 seasons, I’ll count it as a win and fill a serious need. If not, what was I going to do with Reggie Bush or Jacquizz Rodgers types selected at this stage anyway?

Taylor, admittedly, is the longest shot. Hyde, Draughan, Davis, and Harris all reside ahead of him on the team’s depth chart and his 2016 prospects likely rest on him playing meaningful special teams snaps. Still, he’s got a good head for the NFL game, impressive ball security (no fumbles in College) and should acclimate quickly, with a shot to serve as the team’s #2 or 3 back this season.

So, all told… with seven selections over six rounds I came away with no one likely to contribute to my team in 2016 – and I’m still pretty pleased with my draft. Most of all, I think the Hunter Henry (he’s ranked as the 18th best dynasty rookie for fantasy purposes, per fantasy pros) pick has great potential and I’ll be excited to watch my first rounders this year with an eye toward next. With a solid foundation, that’s all I could have asked for heading into the draft.